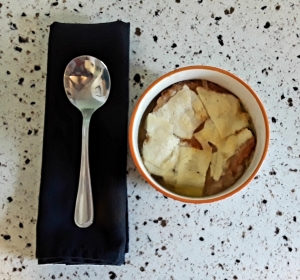 I have always adored French Onion Soup. Well… I love onions in general, so a soup made of onions sounded amaze-balls. A soup with onions and a crunchy cheesy piece of bread, well slap me silly and call me Norma Rae, double trouble!

When Marshall originally gave me Mastering the Art of French Cooking, one of the first recipes I sought out was Soupe A L’oignon. I have created this dish many times and I have always wanted to post about it, but there were so many other recipes that looked more enticing to write about. Then there was the sailing disaster to Maui and so on and so on and blah diddy blah blah.

Well I felt it was time for the official FRENCH ONION SOUP POST! Brace yourselves… It’s awesome. Its delicious (Depending on your marriage it may be better then sex.) IT COMES ON THE BACKS OF GAURDIAN ANGELS!

It is very simple, maybe six ingredients total, and the flavor you create over the long period of time will blow you. (Your mind! I meant to say ‘blow your mind!’)

The dish is tedious, but well worth the effort. Above I show the process of cooking the onions from raw to a beautiful golden brown color. To Coates so much flavor out of something so simple as onions is a skill and blessing. Once you taste it’s sweet bliss you will be in heaven. (HEAVEN!!!)

Making dried and crispy bread that is essential to onion soup. It is much easier then you or I could ever imagine. Cut a piece of bread about one and a half to two inch’s thick off of a good French baggette. Using a brush (A three or four inch painting brush works very well. I think it is very important to have a sylicone cooking/pastry brush in your cooking arsenal because once you use it, you will use it ALL THE TIME! It is also great for barbecue sauces and basting chicken.) coat each side of the bread with olive oil.

Then put the bread into the a heated 350 degrees oven and just watch it. It should take about ten to fifteen minutes to get a good dry and crispy piece of bread, but there is never an exact science to it any of it. I have found that if I tap the top of the bread and it is solid and crisp, you are pretty much done.

Now just plop that piece of crispy bread into a bowl and cover it with your soup. You want to Bring the soup to just over the bread, maybe half an inch over, and then add your cheese. I prefer using real greyere cheese but you can also use a good dry Parmesan. Once you add the cheese, put it under the broiler until the cheese is bubbly and melty and browning slightly.

This dish will make you never want to order French onion soup at a restaurant ever again because it is impossible to recreate such flavors. You can Freeze without the cheese and bread once it is done so you can have it as a quick lunch or dinner.

As always, be brave. It sounds harder then it is.

If you would have told me 15 years ago that I would be a cancer surviving house husband living in Hawaii and owning a winery with my soon to be husband, I would have told you to fuck off. Nothing that good ever happens to me. Yet, today I woke up to the glorious Hawaii sunrise, and the beautiful Ko'olau mountains behind me, and I love it!  I am an amateur writer, foodie, cook and home maker. I want to share all of this with you as I travel and eat as well as share my struggles with keeping a clean house.  My name is Bryon, and I am The House Husband!  View all posts by Bryon Zeigler